The uNMR-NL consortium of coordinator Marc Baldus has been awarded almost 18 million euro from the National Roadmap Large-Scale Research Infrastructure. With this grant the NMR facility that is based at the Utrecht Science Park will be turned into a nationwide grid, linking all Dutch high-field NMR centers. NWO announced the news on 30 April.

Utrecht University is coordinator of the uNMR-NL consortium, led by Marc Baldus, Professor of Structural Biology. Nuclear Magnetic Resonance Spectroscopy (NMR) and Imaging (MRI) exploit the magnetic properties of atoms to non-invasively study structure and dynamics of molecules in both living organisms and materials. The project will receive 17,9 million euro from the National Roadmap Large-Scale Research Infrastructure. 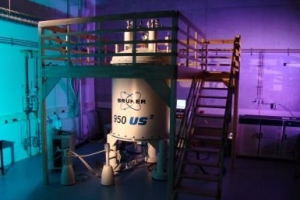 It’s not a first that the researchers receive such a large grant. In 2012 the uNMR-NL was granted 18,5 million euro to place the first ultra-high field instrument, a 1.2 GHz standard bore NMR spectrometer, in the Netherlands. The state-of-the-art NMR facility (YouTube video) was officially opened in 2015 and is located at Utrecht University. “Our aim is to provide nation-wide, open access to cutting-edge NMR equipment and analysis, across scientific disciplines and industrial research”, coordinator Marc Baldus explains.

Expanding the range of applications

The new grant will expand the range of applications and the NMR measurement capacity of the facility, by acquiring new and upgrading existing NMR instrumentation. A nation-wide grid will be formed linking the core center in Utrecht to other Dutch high-field NMR groups, fostering access and exchange between local centers and user groups. The uNMR-NL grid will support diverse research areas ranging from studying disease and the discovery of new medicines and materials for energy storage and conversion to improving crop production and food quality.

“I think this is the first time in the world that a whole country has made such a coherent and widespread plan to coordinate the national NMR/MRI research to maximize output and use for the Dutch society and beyond”, Baldus says. “I am very happy as coordinator for almost 10 years now that we were able to develop this. We will be able to optimally serve our current and potentially new users because our equipment will be up to date and we will together as a grid do research to optimally use NMR infrastructure and expertise for a given problem.”
uNMR-NL ultra-high field NMR facility for the Netherlands.

What drives innovation in micro- and nanotechnology in 2020?
Scroll naar bovenzijde