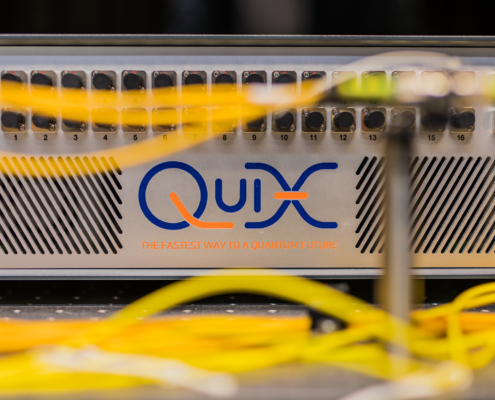 Het thema van dit jaar is: From science to market – scale-up in nanotech

On 3 and 4 December 2020, MinacNed, in collaboration with its partners from micro- and nanotechnology, is organizing the 16th edition of the international MicroNanoConference 2020. This year on a virtual platform where speakers, participants and sponsors meet in online spaces and talk to each other. deal with current topics within the field.

Prior to the iMNC2020, the event organization gave a glimpse into the current playing field during various pre-events. The main themes of the December conference were at the heart of these pre-events. There were discussions about, among other things, safety, food sustainability and cooperation in corona initiatives with public-private partners.

During the conference, we will delve deeper into these themes under the guidance of leading keynote speakers. In interactive sessions there is also a lot of attention for recruitment in high-tech companies during corona and for the growth of startups with the help of experts. Central to this are questions such as: What have we learned in 2020? What will we take with us for the coming years?

In addition to online discussions and key notes, the side program consists of interactive banners, downloads of flyers and of course the personal conversation, whereby old contacts and new leads can be addressed. The iMNC2020 project team is proud to also organize a well-attended conference in 2020 where partners from the micro and nano community will feel at home and can listen to appealing presentations from science and industry.

Registration for the iMNC2020 is still possible via the site. If you cannot attend the sessions live, you have until January 1, 2021 to watch the sessions again.

These five expert committees selected 15 proposals as finalists for the 2020 edition. On Friday, October 30, during the Holland High Tech Autumn Event, the 10 prize winners were announced:

These winners will receive € 25,000 in seed money for the set-up of a public-private partnership project in which their high-tech research innovation is linked to one of the 5 social themes (Health and care, Climate and Circular Economy, Security, Mobility, Agriculture, Water and Food).

Thanks to the research done in Twente, the police are facing a breakthrough in solving murders, rape and other serious crimes. Because a state-of-the-art cotton swab and luminous powder will reveal details that have remained a secret until now. “You have big and small innovations. And these are really big ones. ”

Suppose you are a detective and a murder has been committed. Wouldn’t you prefer to go back in time for a while, to see the crime with your own eyes? But unfortunately, you have to make do with the traces you collect afterwards. And as a result, many important questions remain unanswered.

But for how long? Thanks to research by Saxion University of Applied Sciences, long-cherished wishes of the criminal investigation department can be fulfilled just like that.

How old is that fingerprint?

“Ask a forensic investigator what he wants most, and chances are he will say he wants to know when a fingerprint has ended up somewhere,” says Chris Pellemans of the police. “I have noticed that in my years with the police. Because now we know who the print belongs to, but not how old it is. And so he may have been there before a crime took place. So you do not immediately know whether it is relevant to the research. ”

If you know that, it creates a world of possibilities. Not only, because the fingerprint itself has even more value as proof. For example also because you can question a suspect in a much more targeted way if you already know for sure that he was involved with the victim at the time of a murder or rape.

Secrets from the print revealed

This may become reality through a collaboration between Saxion University of Applied Sciences in Enschede and Deventer and the police. Made possible by researchers Martin Bennink and Jaap Knotter, who are turning the university of applied sciences into a portal of CSI Twente.

They are developing a method with which the secrets of a fingerprint can be uncovered. “Fingers not only leave an imprint on contact, but also substances that then slowly break down, such as fats and proteins. These substances are not yet being researched, but our method can. And so we can determine how long a fingerprint has been somewhere. ”

Smart? Certainly. Desirable? Much more. But does it also require an entirely new technology? No. This is because an advanced, but already existing technique is used. The secret lies in so-called quantum dots, tiny nanoparticles that cling to certain substances and thereby emit light.

“The dots we use attach themselves to the body substances left in a fingerprint. Based on the amount and type of light, we can see how old the fabrics are. ” Bennink and Knotter hope to be able to accurately trace the age of spores to the day, but do not rule out that further research will reduce this margin even further.

Mix with the powder

Adding those nanoparticles to the powder that the police use to detect fingerprints opens up completely new possibilities. Bennink: “For example, by shining on it with special light you could in the best case already be able to see how old a fingerprint is at a crime scene. And if we go one step further, the camera could take a picture with a smartphone, send it to a national database, and then retrieve important information about the printout within minutes. ”

Police officer Pellemans, in his position responsible for innovation in forensic investigation, says that such an application sounds like future music, but is perhaps relatively closer. “Within the police, a trial is already underway with sending photos of fingerprints. These are sent directly from the PD to the national database, after which an investigation quickly shows whether there is a match, and therefore whose printout is. This could be a wonderful addition to that. ”

Cotton swab of the future

As if one potentially groundbreaking development was not enough, Saxion is simultaneously working on another promising project: a state-of-the-art cotton swab. Purpose of this invention: to secure more traces than with the current cotton swabs, and then also to investigate immediately at the scene of the crime.

Developer Jaap Knotter knows where to make a profit: “The current cotton buds, comparable to the ones everyone has at home, are made of material that absorbs liquids reasonably well, but then releases them in a fairly bad way. This ensures that about 20 to 25 percent of the traces that now end up in such a cotton swab are lost. ”

With the Saxion cotton swab, that should be a thing of the past, says Knotter. “We started looking for a material that absorbs substances even better, and therefore releases them much better. We found them in a special type of ceramic. ” The ceramic contains a membrane with which exactly the desired cells can be absorbed. This should ensure that traces are no longer lost.

Here also, the developments are promising, but the ceramic cotton swab is far from finished. The first prototype was rejected because the tip with which traces could be recorded can leave scratches on hard surfaces. “So we are now adapting the cotton swab in such a way, in material and shape, that this will not happen again soon.”

Knotter and his team are also working on a so-called “lab on a chip”, which can be used in combination with the cotton swab. With this, the cotton swab must also be able to analyze the recorded traces directly. “In this way we hope to be able to determine immediately whether blood, for example, is from a person, and then from a man or a woman. Now that takes quite a lot of time, because we first have to send the spores to a lab. If we could do that research directly on site, it would help us enormously. ”

As a policeman, Pellemans rubs his hands on these prospects, right? “Yes. You have big and small innovations and both the cotton swab and the fingerprints would be really big innovations. But we still have to be careful, because there is still a way to go before detectives walk on a crime scene with these things. ”

Permission required for use

This is due to several factors. Firstly, developments need to be further examined, improved and approved. How long will that take? “That is difficult to say”, Bennink knows. “It would be great if we had a product within a year and a half that we know can be used in practice.”

After that, other forces will also play, Pellemans knows. “For example, we need to look at any ethical objections attached to conducting new studies. We need permission for everything we want to investigate, especially when it comes to human traces. The Public Prosecution Service, for example, has an important role in this. ”

Still, the researchers are optimistic. Knotter: “Not only because of the steps we have already taken. If they had led nowhere, we wouldn’t be moving on now. But maybe more, because this is a perfect example of collaboration. Our developments are direct answers to questions from the police, and cooperation is also very close in development. So I have every confidence that our inventions will be put to practical use. ”