2020: it was an eventful year, also for all PPP grant projects. Laboratories were closed, travel to and from abroad (and thus appointments of research personnel) was not possible, private parties could no longer fulfill their commitments to collaborative research, and people were ill for a long time because researchers can also contract COVID-19.

Survey: many obstacles and delay

In a survey, 46 projects – partly funded with HTSM PPP Allowance – reported experiencing limitations and 76% of these were delayed. In short: the COVID-19 crisis also presents many obstacles to HTSM PPP projects, just as it affects many other innovation developments. 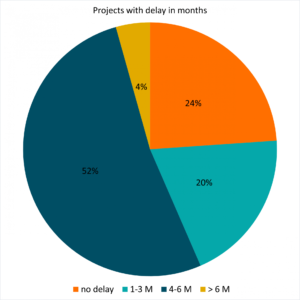 Projects were still able to continue due to postponement

Looking back on the past year, the impact on these PPP allowance projects is fortunately not too bad. This is due to the great creativity of the project implementers and to the flexibility of the Ministry of Economic Affairs and Climate Policy and RVO. The national government soon came up with a leniency rule; when projects financed in 2014, 2015 and 2016 were demonstrably delayed by COVID-19, they were considered for a maximum delay of 6 months.

The PPP Allowance projects roughly deal with two types of restrictions. In one category we find relatively new projects that are funded from relatively recent program grant years (2017 – 2019), with problems due to appointments, travel restrictions and lab closures. Because the use period for the funds will continue for a number of years, the delay that has arisen can still be made up there and no postponement is being considered.

The other category concerns projects financed from program allowance years 2014 – 2016 with a planned end date in 2021. A substantial part of these HTSM allowance projects are carried out in a European context, such as projects in the aviation industry. These projects often also partly include European funding, for which a postponement has often been promised by the European partners.