The Economic Board of the Arnhem-Nijmegen region, with Wageningen, Twente Board and Oost NL are joining forces for an Artificial Intelligence strategy for the eastern part of the Netherlands. Artificial Intelligence (AI) will determine our future prosperity and well-being. Lifeport (the innovation network of the Arnhem – Nijmegen region, with Wageningen) and Twente already have an ambitious agenda in the field of AI. With this joining of forces, the Eastern Netherlands can make a substantial contribution to the Netherlands’ AI innovation strategy. It also ensures a strong national and international position, it offers opportunities to raise funds in Europe and it opens up better knowledge for the business community, so that the (Eastern) Netherlands increases its competitive position. 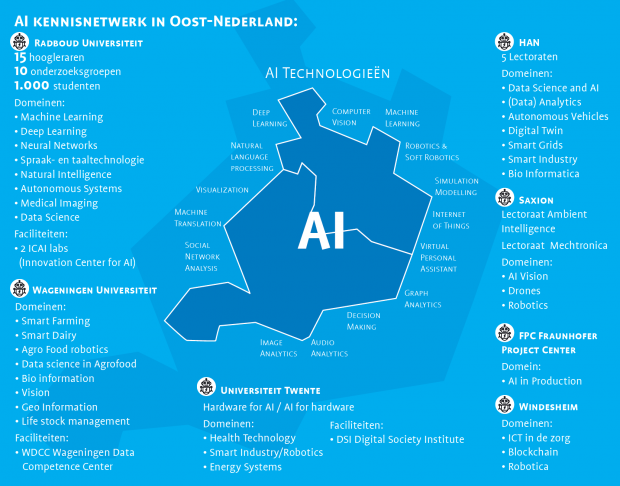 Both regions thus contribute to the innovative AI ecosystem of the Netherlands and Europe. The collaboration focuses on two spearheads, namely AI in the manufacturing industry, to increase competitiveness through further digitization of the industry, and AI for Health, to make healthcare future-proof. Both spearheads are strategic themes of the provinces of Gelderland and Overijssel.

Artificial Intelligence in the Eastern Netherlands

In the Eastern Netherlands, more than 170 companies, many of them SMEs, are actively engaged in the development of AI applications. Examples can be found in the infographic Artificial Intelligence (AI) in the Eastern Netherlands. The joint formulation of an Eastern Dutch proposition and strategy in the field of AI will bring national and European resources closer, such as new EU programs Digital Europe and Horizon Europe. For example, knowledge that is available at universities and universities of applied sciences will be marketed more quickly – and it will be easier for companies (internationally) to collaborate on innovation.

The Eastern Netherlands has a great deal of knowledge when it comes to AI. Knowledge institutions such as Radboud University, Radboudumc, Wageningen University & Research and the University of Twente play a pioneering role in this. They want to jointly strengthen themselves in the field of human centered AI, AI for manufacturing and integrated AI in relation to the application areas of health, energy and agro / food. Universities, colleges and companies work together intensively. High-quality knowledge therefore has easy access to practice.

AI in the Eastern Netherlands: important for the region and innovation engine for the Netherlands and Europe.

The Economic Board of the Arnhem-Nijmegen region, together with Wageningen and the Twente Board, will further develop a widely supported AI strategy with all stakeholders, public, private and knowledge institutions, in the coming months. An important building block for this is Think East Netherlands, a collective of 24 regional partners that gives AI in the East Netherlands a clear face in a European context. East Netherlands with its powerful AI ecosystem is an important engine for AI innovations in the Netherlands and Europe. The strength of SMEs, the many spin-offs, the strong networks and field labs such as Boost Smart Industry Network and Topfit, the ICAI labs and the strong cooperation with Germany are just a few examples.

Artificial Intelligence as a key technology.

Artificial Intelligence, also known as artificial intelligence, can be described as the ability of a system to correctly interpret external data, to learn from this data, and to use these lessons to achieve specific goals and tasks through flexible adaptation.

Artificial Intelligence is seen as a key technology. Because it is widely applicable, the development of AI has an impact on many business sectors and society as a whole. This offers great economic opportunities. This makes AI a means to maintain and expand an internationally competitive position and to solve economic and social issues. The Netherlands, therefore, aims to build and maintain a strong and distinctive position in both the development and application of AI.

How integrated photonics accelerate the roll-out of point-of-care diagnostics...